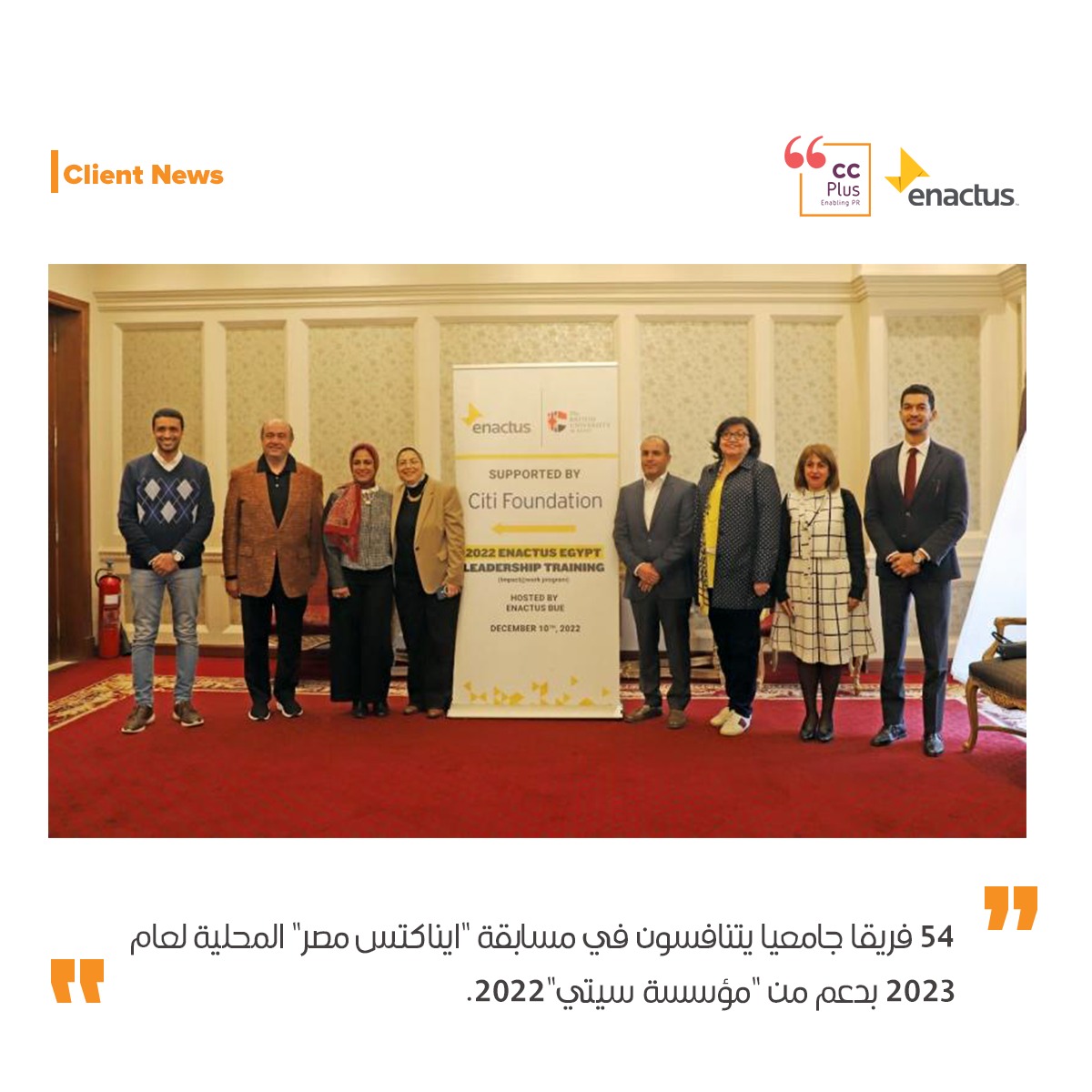 With the sponsorship of the “Citi Foundation,” 54 university teams to compete in the “Enactus Egypt” competition in 2023

Cairo – XX December, 2022: “Enactus Egypt” has announced the launch of the second phase of the social entrepreneurship program “Impact@Work,” in collaboration with the “Citi Foundation,” with participation beginning in July 2023. This was unveiled at a press conference held at the British University, which was attended by a large number of businessmen, officials from both parties, and representatives from Egypt’s Central Bank.

In July 2023, university teams from 54 universities representing around 9,700 students from various Egyptian governorates will be allowed to compete in the Enactus Egypt competition  to demonstrate their efforts in generating a social impact and compete based on the quality of their entrepreneurial ideas that achieve a creative and long-term impact on people, the environment, and prosperity in their community.

“In Enactus Egypt, we all work together as a board of directors in a spirit of love and cooperation,” Lamis Negm, advisor to the governor of the Central Bank for community responsibility and a member of the Board of Directors of Enactus commented. “We all have a strong desire to help youngsters and society via various programs and projects  that empower these young people, and We are delighted to begin the entrepreneurship program, and we wish Egypt’s youths continued prosperity and growth.”

Fatma Sirry, CEO of Enactus Egypt, expressed her delight at launching the second edition of the Impact@Work Program in a way that encourages creativity and entrepreneurship for the second year in a row.

“This program assists in the training of a large number of students in a manner that improves the labour market. Enactus is the largest training platform for university students, with presence in 54 universities,” Fatma Sirry, CEO of Enactus Egypt stated. “We represent the collaboration of academics and businessmen through conducting programmes centred on entrepreneurship, innovation, and sustainable development.”

Fatma Sirry, CEO of Enactus Egypt, expressed her pride that Egypt had won the World Cup six times, including four times in a row, indicating that Egyptian youth can accomplish a lot for society when given the right skills and training.

“We began Enactus with four universities and 120 students, and now there are 9,700 students from various governorates participating in the programme each year,” Sirry added. “Enactus students are highly demanded in the work market because of their brilliance and talents.”

Mohamed Abdel Kader, Managing Director of Citi Country Officer, Egypt, confirmed: “The collaboration with Enactus is part of the Citi Foundation’s “Pathways to Progress” programme, which is meant to empower youth with the tools they need to prepare for employment and flourish in today’s economy.”

For the first time in Egypt, Citi Foundation and Enacts Egypt collaborated this year to launch the first phase of the Impact@Work social entrepreneurship program, which aims to teach, assist, and mentor 2,500 students between the ages of 18 and 25 in the practical and entrepreneurial skills required to turn social impact projects into enterprises.

The Impact@Work programme assisted young people who lacked empowering chances in developing income-generating economic, social, and environmental projects through a grassroots strategy to reaching high-potential youth from low- and middle-income families and transforming them into entrepreneurs capable of starting their own businesses.

Egypt is the only country out of roughly 32 that has won the Enacts World Cup for two years in a row, in 2009 and 2010. Additionally, Egypt finished second in 2012. The combined efforts of the students, advisory board members, and local partners culminated in October 6 University finishing second in the 2018 World Cup. Also, Cairo University’s Enactus team won the 2019 Enactus World Cup, and President Abdel Fattah El-Sisi recognised them at the World Youth Forum in Sharm El-Sheikh.

Enactus Egypt’s aim is to be Egypt’s most widespread and vital strategic partner in empowering communities via corporate education and developing the capabilities of leaders who use business to make the world a better place.  Our goal is to build a better, more sustainable society and our mission is to inspire the next generation of entrepreneurs to use innovation and business concepts to better Egypt.