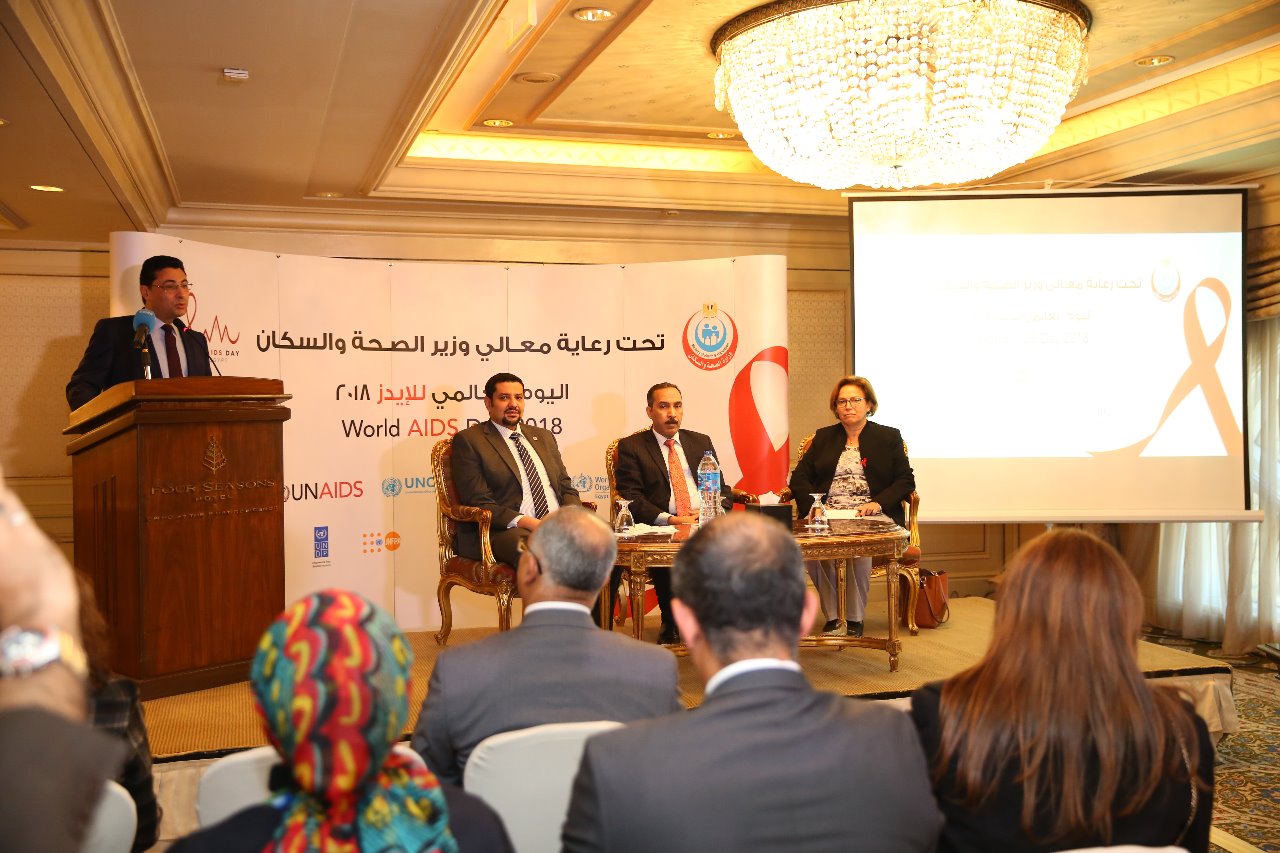 Cairo, 11 December 2018 – Under the auspices of the Egyptian Ministry of Health and Population, the Joint team of the United Nations on HIV/AIDS has commemorated the World AIDS DAY 2018 on Tuesday with the aim of promoting a theme designed to encourage people to know their HIV status and seek treatment.
Under the theme of “Know Your Status” the day seeks to raise awareness on HIV/AIDS, promote testing, prevention, treatment and support. Also, the day calls to reduce stigma and discrimination associated with the virus.
The occasion also marks the 30th anniversary of World AIDS Day, a global health campaign that seeks to encourage people to identify their HIV infection status and urge policy-makers to promote the “Ending AIDS by 2030” agenda for HIV and related health services.
“UNAIDS works to support the Egyptian government to reduce new HIV infections as part of the UNAIDS’ global fast-track targets towards ending AIDS by 2030 as a public health threat. While Egypt remains with a low prevalence epidemic, there are signs of a concentrated epidemic among key populations” said Dr. Ahmed Khamis, UNAIDS Country Manager.
“This year’s campaign is making a special effort to reach out to people who are HIV positive but are not aware they carry the virus, which could remain hidden up to 10 years before being diagnosed,” Dr. Khamis said. Around 25 percent of people living with HIV (9.4 million around the world) are not aware of their status and still need access to HIV testing and treatment services, he added.
Testing and linking to care is key to scaling up HIV treatment, ensuring a healthy life for all people living with HIV.
Ms. Randa Aboul Hosn, on the behalf of United Nations in Egypt and as UNDP Resident Representative A.I., said: “this day serves as a reminder that, despite the availability of a wider array of HIV tools and strategies, the world is still profoundly off-track to end AIDS by 2030. We must reinvigorate our efforts to urgently scale up HIV responses, including investments in addressing the disparities which continue to fuel HIV. Unfortunately, HIV-related stigma and discrimination are ever present and deep inequalities persist, challenging the gains and progress of the HIV response.”
Dr. Alaa Eid, Director of the Health Ministry’s Preventive Medicine Sector, said that the ministry is adopting an active national strategy under the slogan of “Ending AIDS by 2030” to end HIV as a public health threat by 2030. Eid also highlighted that Egypt is among the countries with the least HIV prevalence in the world, at less than 0.02%.
Eid pointed that the post-exposure prophylaxis for healthcare providers and prevention of mother-to-child transmission program, has been implemented in all governorates in order to reach a new generation free of AIDS. The package was provided to all pregnant mothers with a 100% success rate in reaching non-infected children. He also stressed that the preventive department through the National AIDS Program provides many preventive and curative services for people living with HIV and their families, including a high-quality service to promote the reproductive health of women. This takes place in cooperation with several centers that are equipped with specialized teams of obstetricians and gynecologists as well as psychiatrists that provide mental health support services.
Furthermore, psycho-social support groups are available to carry out sessions for treatment literacy for people living with HIV and their families in order to better understand the clinical symptoms, and improve adherence to treatment, which ultimately leads to a reduction in the viral load.
Advocacy campaigns are also carried out inside healthcare service provision sites promoting people living with HIV rights to confidentiality and equal access to treatment and healthcare services.
Dr. Walid Kamal, the National HIV/AIDS Program Manager, said that the government’s antiretroviral treatment program covers all Egyptians living with HIV across 14 government-run centers, adding that the treatment is provided for free to people living with HIV.
Additionally, twenty-four centers across 18 of Egypt’s 27 governorates offer HIV counseling services and anonymous confidential voluntary testing, while periodical follow-up services are available at 14 care centers across the country, he said.